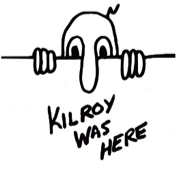 Wherever American forces went during World War II, Kilroy was there.  Sailors found him scrawled on the bulkheads of newly commissioned ships. When soldiers landed on Pacific Islands for the first time, they discovered Kilroy waiting for them. Platoons spotted him chalked on the rubble of bombed-out cities. Starting today, you can find him all over Virginia!

The World War II Heritage Alliance, a coalition of seven museums and memorials around the Commonwealth, kicks off “Operation Kilroy”.  The new initiative encourages visitors to learn about Virginia’s role in the war and the war’s impact on the home front.

Named for the iconic graffiti of World War II, visitors are issued an “Operation Kilroy” passport to collect stamps from participating sites. After four stamps a passport can be redeemed for a prize at the fourth location.

Passports are available at the sites, regional welcome centers, or at www.wwiiheritagealliance.org.